Since the last installment with a controversial primary school mathematical question, another interesting but no less challenging question is being popularized recently on local social media. The question involved finding the value of 9 single digit variables, namely A to H and P, that will fulfill the following simple calculation, where A to H are all of different values, and

As reported in local newspaper, this question originated from a primary school for provoking student’s mathematical thinking and is not in standard syllabus. Yet it is challenging even for university graduates.

It is not the intention here to discuss the pedagogy of this problem, but only to explore solving this interesting problem using Excel without any programming.

The Excel Solver is able to solve this question by modelling it into constraints. Usually for Solver problems the variables are modeled in single cell values, but since this question mandated some intrinsic properties that are not easy to be defined in the Solver dialog, a special matrix is used instead of single cell value like in the below so that constraint of each variable carries different value can be defined.

The various constraints are modeled in the Solver dialog. Each sum of row must be one implies only one digit is selected for each run for A to H. Likewise each sum of column must be equal or less than one implies no duplicate digits for each run. Integer constraint is also applied. The target cell containing the equation of PPP – (AB – CD + GH) is set to zero. Simplex-LP method is selected for this problem, while it was believed that evolutionary methods better suit the model as the matrix has high resemblance of genes. 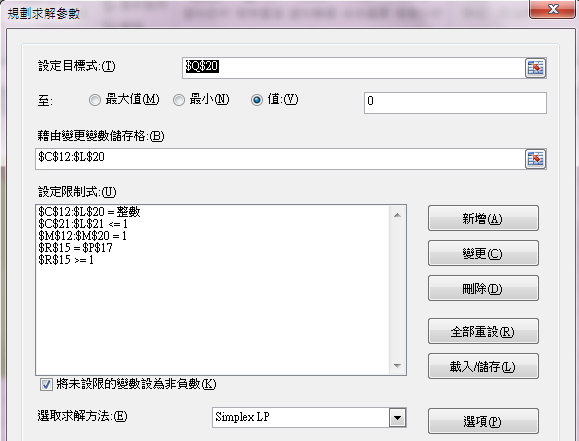 Running the Excel Solver to obtain the result. On an Intel Core i5 it took almost 2 seconds!

A more descriptive diagram showing the relationship between cells that the model is comprised of. The column next to the Sum of row one are sumproduct cells that will naturally return the values represented by each variable according to the selected single digit value.

The Excel Solver is not just versatile but also is fun in itself to work with tricky problem like this “primary school” question.

© gmgolem, 2020. Unauthorized use and/or duplication of this material without express and written permission from this blog’s author and/or owner is strictly prohibited. Links may be used, provided that full and clear credit is given to gmgolem with appropriate and specific direction to the original content.