The TI Nspire provided a very rich set of 3D graphing capability including function and parametric plotting. Thanks to the hardware upgrade from its predecessor, the real time rotation and animations are more than satisfying most of the time. Samples below can be created and visualized on the Nspire with a few inputs. It is quite nostalgic to see these wireframes for us who had been through the 90s when CAD software was in its infancy on the road to being readily commercialized!

Speaking of the predecessors of the Nspire, the Titanium is the first to offer built-in 3D plotting capability in the TI lines of calculators. To this day I still find it interesting to plot some surface that it seems impossible to plot in the Nspire, like the combinatorics function shown below. The same function in the 3D graph on TI Nspire simply resulted in syntax error, but is evidently possible on the Titanium, not only with a functioning plot as shown in graph below, but also the correct trace values in the graph trace function. 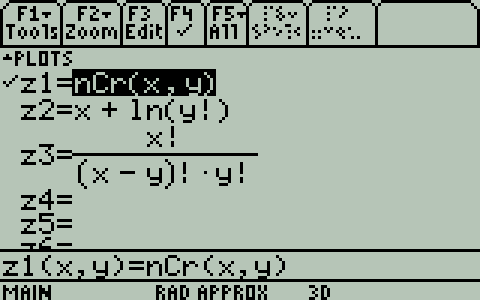 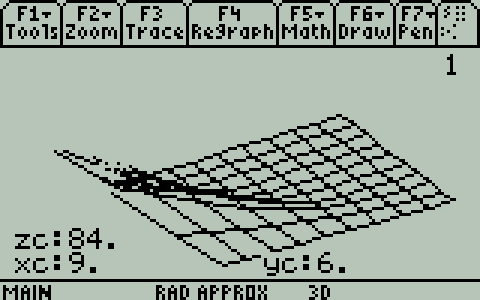 The following window setting is the optimal for such graph.

© gmgolem, 2020. Unauthorized use and/or duplication of this material without express and written permission from this blog’s author and/or owner is strictly prohibited. Links may be used, provided that full and clear credit is given to gmgolem with appropriate and specific direction to the original content.